We have explained the performance optimization knowledge points of Unity’s mainstream modules one by one four years ago, commonly known as “Basic Version”. As the engine itself, hardware equipment, production standards, etc. have been upgraded in recent years, UWA has also continued to update optimization rules and methods and continue to output to the majority of developers. As an “upgraded version” of the performance optimization manual, [Unity Performance Optimization Series] will try to express it in a simple and understandable way, so that more developers can use it. In this issue, we will continue to share the knowledge points related to the animation module.

Currently, in UWA report, we can see that the main functions related to animation include:

There are two Animator-related functions: one is DirectorUpdateAnimationBegin and the other is DirectorUpdateAnimationEnd. Generally speaking, we must pay attention to the stack of these two functions, and further locate the cause through the number of calls of the stack function and the proportion of time consumed. Common factors affecting performance and optimization countermeasures are as follows:

1）Control the number of Active Animator

The number of characters increase will lead to an overall time-consuming increase, and the CPU time of each function increases approximately linearly with the increase of the character data. 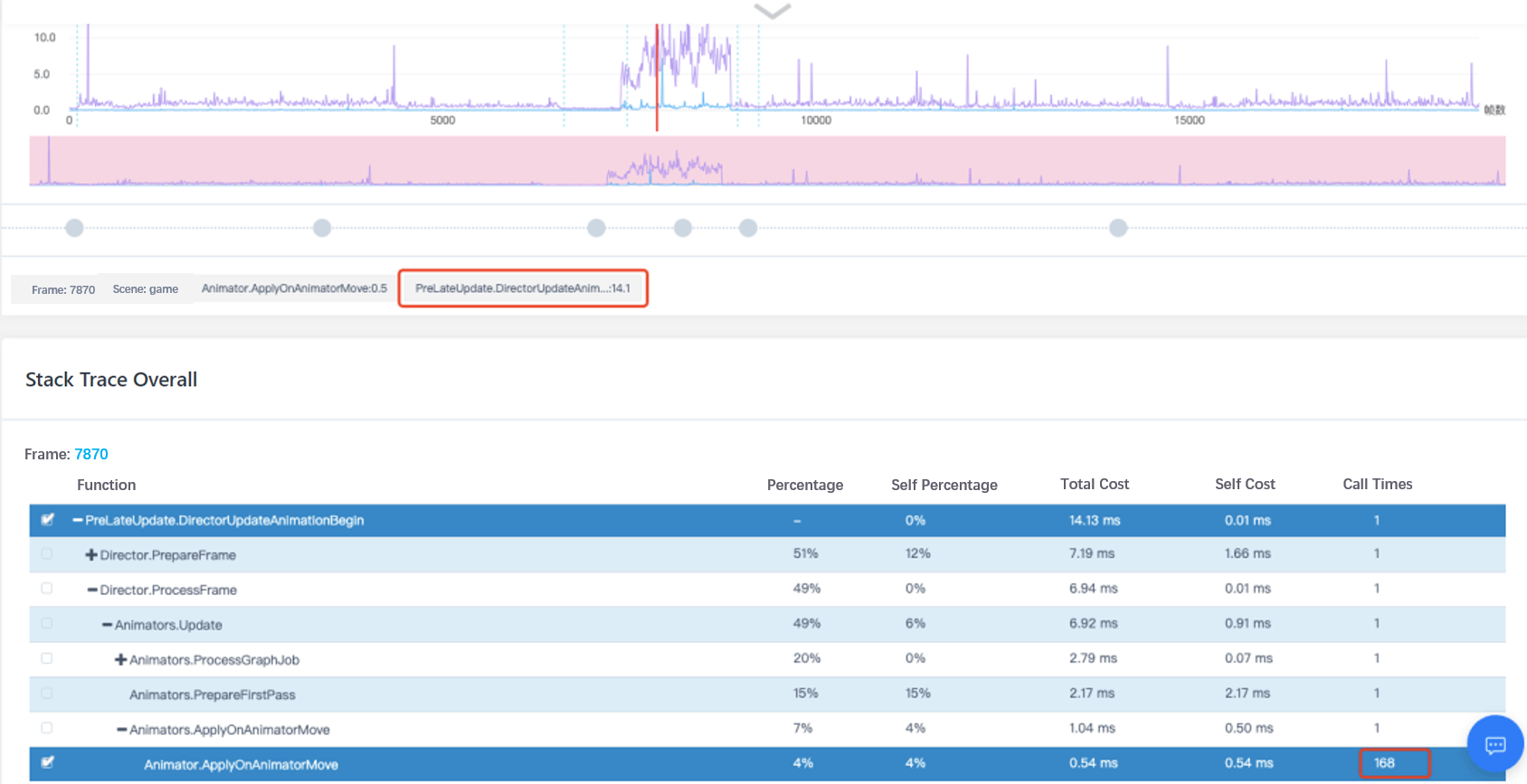 The above picture is a real-device evaluation report of a project. We selected a frame to check its stack information and found that the number of calls to ApplyOnAnimatorMove is up to 168 times, which means the current scene there are 168 Animators in the Update state i, this value is very high. In general, it is recommended to keep it within 30 as much as possible. 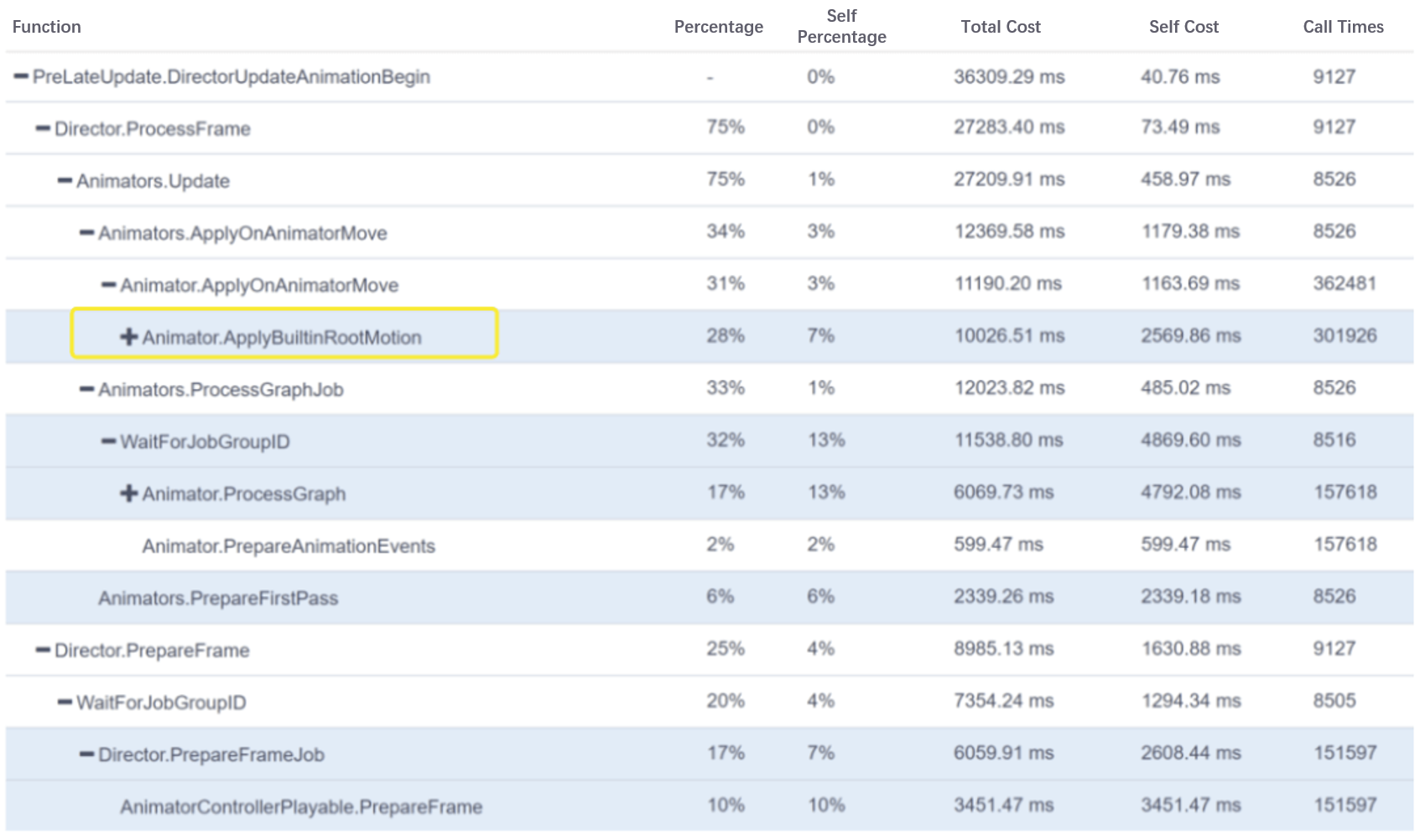 According to the stack analysis of Animators.Update, we can see that Animator.ApplyBuiltinRootMotion proportion up to 28%. This item is usually related to a model animation in a project where Apply Root Motion is turned on. If the animation does not require displacement, you do not need to turn on this option.

4) Control the trigger frequency of Animator.Initialize

5) Too many Animator Controllers in AlwaysAnimate mode

CulI the AlwaysAnimate state, when the character is off-screen, Update cost will continue to be generated. It is recommended to change this option to CullUpdateTransforms or CullCompletely. CullUpdateTransforms applies to Animator Controller whose animation will displacement, and CullCompletely is suitable for Animator Controller whose animation does not displacement.

It is recommended to turn off the native GPU Skinning operation of the Unity engine. This operation will cause additional costs and cause invalid waits in the main thread or rendering thread.

At the same time, for many of the same kind of monster’s needs, we highly recommend rendering through GPU Skinning and GPU Instancing in the open-source library, which can reduce the time-consuming of Animators.Update and achieve the effect of batching.

For your reference, the above are the common problems we encountered when optimizing the animation module. For efficiency, the editor still provides you with a very routine but really efficient method [We should always do printing presses instead of hand-made coins ]. You can refer to the performance briefing and press ctrl+f to search. “Animation”, if the animation module in your report is not healthy, you will see these unpassed detection items soon: 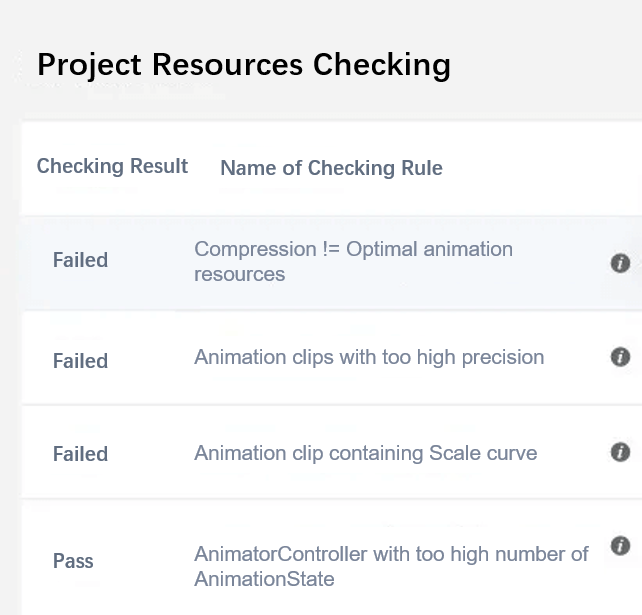 The above are some of the issues and corresponding approaches that need to be paid attention to when optimizing the performance of the animation module. How to operate still needs to be combined with the actual situation of the project. UWA GOT Online has provided a wealth of detection functions, and hope to be a good assist for everyone to optimize the animation module.

Unity Particle System Optimization: How to Optimize the Special Effects of Skills