1) Questions about Addressable
2) How to perform the hot update of Addressable
3) How to set the Shader variable of SceneView camera
4) The reason why Activity defaults to SingleTask
5) About the Resources.UnloadUnusedAssets call time is too long

Today, we continue to select a number of issues related to development and optimization for you. It is recommended that you read it for 10 minutes, and you will be rewarded after reading it carefully.

Q: I have been watching Addressable for the past few days. Although I don’t fully understand it, I feel that it is much easier to use than AssetBundle, and I have considered it very well. There were some questions when referring to Addressables 1.6.2:

A1: The first question: Addressable is finally packaged into AssetBundle, and the package storage directory is determined by the Build Path set by the BundledAssetGroupSchema of each Group. The Bundle Mode of the BundledsetGroup Schema determines whether the resources of the same Group can be packed into a Bundle. If it is Pack Together, it will be packed into a Bundle, and Pack Separately will pack each Entry into a Bundle. The issue of granularity is similar to the use of Asset Bundles. Addressable will automatically manage the dependencies of the Bundle packages. If the dependent resources are not in other Bundle packages, they will be automatically added to their own Bundles.

For the second question, you can refer to the details in the picture: 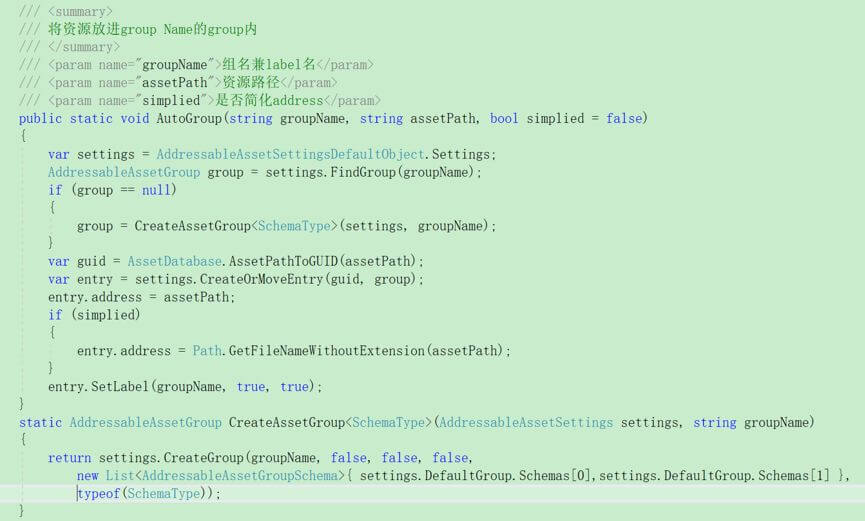 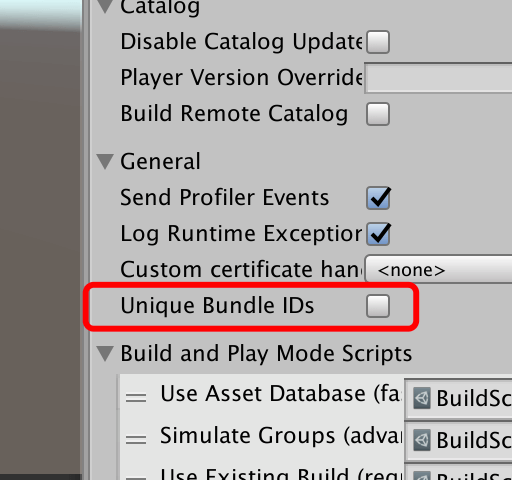 So how to implement this function in Addressable? Can you set a priority to read the directory?

A: I don’t know what does mean the title refers to by setting priority to read the directory. For the moment, let’s talk about it according to what I understand. The resource update function of Addressable needs to be handled in two aspects: Editor and Runtime. In the Editor section, you need to check to Build Remote Catalog in Setting. The Catalog files (.hash and .json files) will be generated after using New Build for the first time. These two Catalog files and the typed Bundle files need to be placed on the server superior. Then update the resources afterward, you need to Update a Previous Build to the package. At this time, the Editor will overwrite the original catalog files (.hash and .json files), and a new Bundle file will be generated at the same time, just replace the original file of the server with the newly generated file.

In the Runtime part, you need to call CheckForCatalogUpdates and UpdateCatalogs to update resources. When the resource is updated to the local, calling Addressable.LoadAssetAsync will automatically load it from the local directory. I don’t know if the local directory here is the priority directory mentioned by the subject.

A: If you want to synchronize the GameView camera to SceneView, you can try the following methods:

Q: The Gradle project exported by Unity will configure UnityPlayerActivity as SingleTask by default. However, in actual testing, many third-party SDKs conflict with the configuration of SingleTask.

Is there any design reason why Unity uses this default configuration? What are some pitfalls if you modify to Standard?

A1: The main purpose is to prevent the game from being started and causing a second crash, but it is not enough to rely on LaunchMode as SingleTask. There will be third-party SDKs that require following their requirements. For example, Tencent channels require SingleTop: The LaunchMode of the game’s Activity is required to set to SingleTop. After setting to SingleTop, in the scenario where the platform pulls up the game, two game activities may be pulled up. Therefore, the onCreate of the game activity needs to detect whether the current activity is a duplicate game activity, if it is, then needs to end the current game Activity.
So the two-handed preparation is better. If you can use SingleTask just use it. If it doesn’t, use static variables to make judgments.

A2: This has a certain contribution to reducing the number of downtime statistics. Many times your game is not set to SingleTask, switch back to the backend and return to the game again. It may be pulled up again, which increases your downtime statistics. It has a big impact on the downtime rate.

Q: There are hundreds of skins, mounts, wings, and other appearances to display Prefab in the game. These Prefabs are loaded through AssetBundle. When the Prefab is created, AssetBundle.Unload(false) will be called to unload the AssetBundle, but GameObject and the corresponding resources will also be kept in memory.

The problem now is: After all these appearance models are clicked on the mobile phone when Resources.UnloadUnusedAssets is called for the first time, a lag that may be as long as 20 seconds will occur. If those GameObjects have been Destroyed, and the corresponding resources in the memory are all turned into the garbage to be recycled, it is understandable that calling Resources.UnloadUnusedAssets will be stuck for so long, but now the problem is that these resources are still being referenced and will not be cleaned up by the API? It has been confirmed that it is not caused by other resources and even the AssetBundle.Unload (false) interface has been tried to be blocked. The same operation will also cause a lag.

The biggest question now is: how did this 27 come from? Which resources are marked as garbage and then deleted?

A: In the case of 20 seconds, is there a corresponding log? Look at which one takes a long time in the 4 steps, and what is the magnitude of Objects.

You can try to change your test code like this: