The Origin of Gamma Space

What we are going to talk about next is related to the post-processing effects and the adjustment of colors. Before starting the main contents of the specific post-processing effects, we need to understand some basic knowledge, one of which is related to the final output display of colors. Next, we will learn about Gamma Space and Linear Space, including the origin of Gamma Correction, the specific application of Color Space in project development, Unity and Unreal engines.

We need to clarify a concept in the beginning: the current discussion on Gamma Space is based on the limited grayscale budget. The specific content will be explained in more detail later.

In the not-so-distant past, the mainstream display at that time was the CRT (Cathode-ray tube) display, the full name of which is the cathode ray tube display: 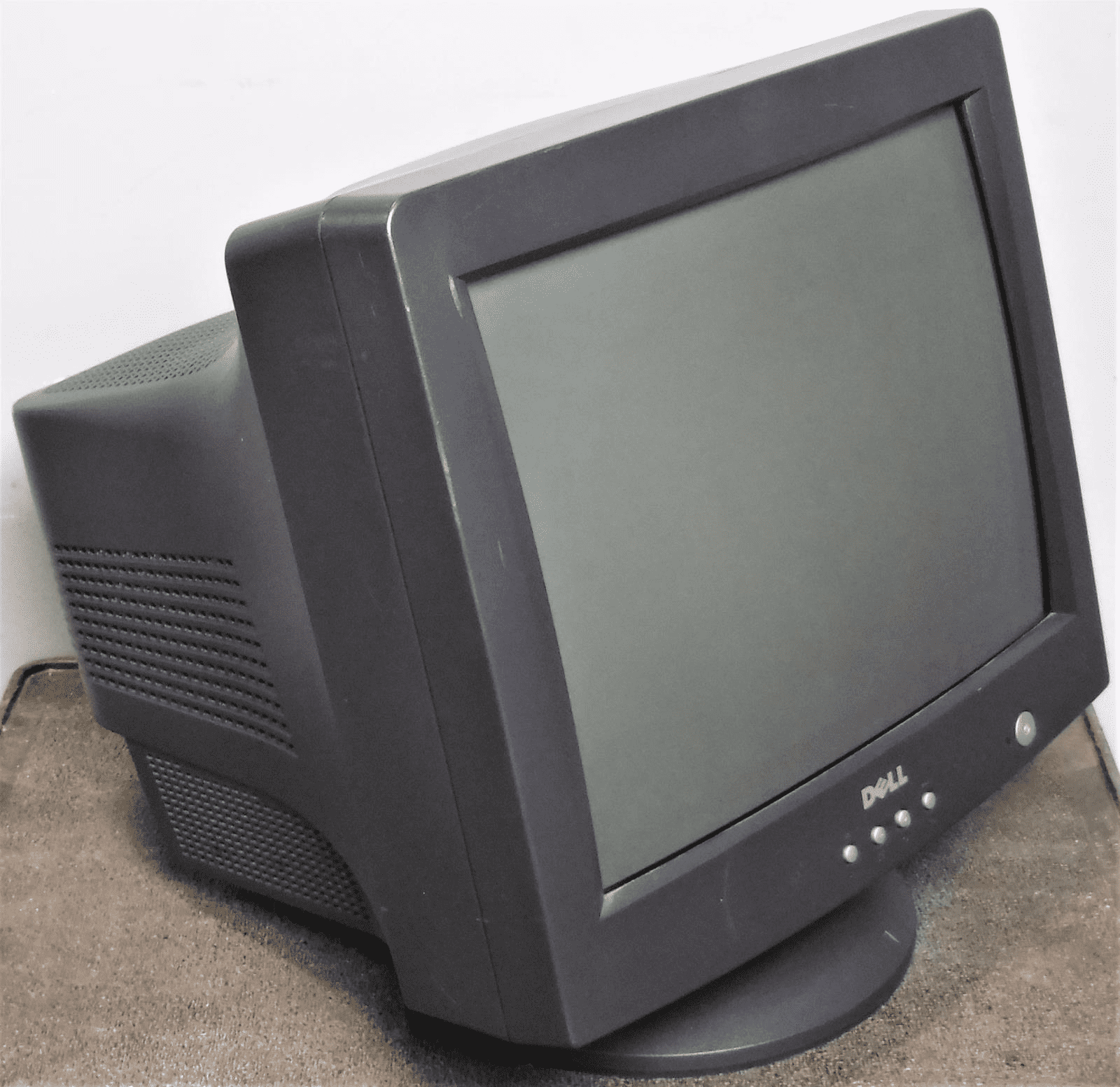 When the voltage changes linearly, compared to the real world, the brightness of the CRT display changes slowly in the dark area, resulting in a wider range of dark data and a darker overall picture.

And our goal is to see the normal brightness similar to the real world. Since the CRT display is in the Gamma 2.2 space, the brightness of the picture we input to the display needs to balance the influence of Gamma 2.2. This operation is called gamma correction (Gamma Correction), which is actually approximately equivalent to performing a 0.45th power operation so that the color is in the Gamma 0.45 space:

This allows the color to be restored to resemble the color in real physical space:

Theory of Grayscale Perception of the Human Eye

On the other hand, in the real physical world, if the light intensity increases from 0 to 1, then the brightness increases linearly with it. But the human eye perceiving brightness is not linear. This point is demonstrated in the Weber-Fechner law: people’s perception of external stimuli is not linear, the increase of the sensory quantity lags behind the physical quantity, the physical quantity grows in geometric progression, and the psychological quantity grows in arithmetic progression. That is: when the brightness perceived by the human eye increases by one level, the light intensity actually increases several times.

With a simple mathematical simulation of this phenomenon, it can be considered that people’s psychological perception of brightness is similar to the Gamma 0.45 space curve:

It can be seen that people are more sensitive to the perception of darkness. For example, in the same room, lighting in the dark and turning on a light after turning on a hundred lights, give people a completely different feeling of brightness change. Although in the real physical world, the amount of light intensity increases is the same.

Therefore, even if the current display voltage and brightness are basically linear, this rule is still followed, and the display Gamma value is set, the purpose is to display more brightness in the dark area so that the gray level of the dark area perceived by the human eye is equal to The number of gray levels in the bright area.

However, with the advancement of technology, one day each channel will be 32-bit so that each channel can have 4294967296 grayscales. With such a huge number of grayscales, the brightness that can be displayed is sufficient, so there is no need for Gamma. The corresponding brightness can be obtained by directly displaying the stored result. This is the premise mentioned at the beginning of this article: the grayscale budget is limited, and a reasonable allocation is required to ensure the brightness range.

In order to match CRT monitors, so that pictures can be displayed on monitors with 8 bits per channel without conversion, HP and Microsoft designed a Standard Red Blue Green color space (sRGB color space) in 1996. Most image files these days are in this color space.

The sRGB color space corresponds to the space where Gamma0.45 is located, which is equivalent to performing a gamma correction on the color of the physical space. The color in the physical world is stored in the space where Gamma 0.45 is located. After adjustment by the monitor Gamma2.2, the result displayed on the real device is consistent with the color of the real physical space.

In this section, we introduce two mainstream views on the origin of Gamma Space, and understand the corresponding calculation methods and practical significance behind them. In the next section, we will talk about how it affects our work, and how we can apply it rationally.

Due to the presence of Gamma Correction, we have a little trouble with the calculations in the render. For example, there is a nonlinear input of an sRGB image, and then the operation is performed in a linear space, and the final output result will deviate from the desired result.

Lighting Display under Different Spaces in the Unity Engine

Therefore, in order to ensure a more realistic and accurate restoration of the color of the real physical world, a better production process is to unify the input, calculation, and output in a linear space, then perform Gamma Correction and finally display it on the monitor.

First, we need to ensure that the input data is in linear space. For sRGB textures, we need to perform Remove Gamma Correction (perform a 2.2 power operation) to bring it back to linear space.

Next, perform operations through Shader, and this part of the calculation is in linear space.

Then, Gamma Correction is performed on the result, which is finally output through the display. This gives a result that is close to the real world.

Let’s take the grayscale value of 1 as an example, assuming that after the Shader operation, the output result is 0.9 times the input result. 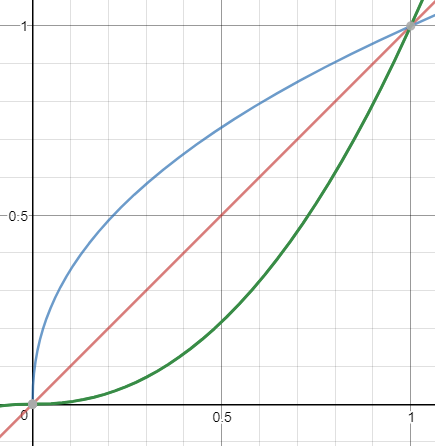 The choices for Linear Space and Gamma Space are located in Project Settings->Player->Color Space: 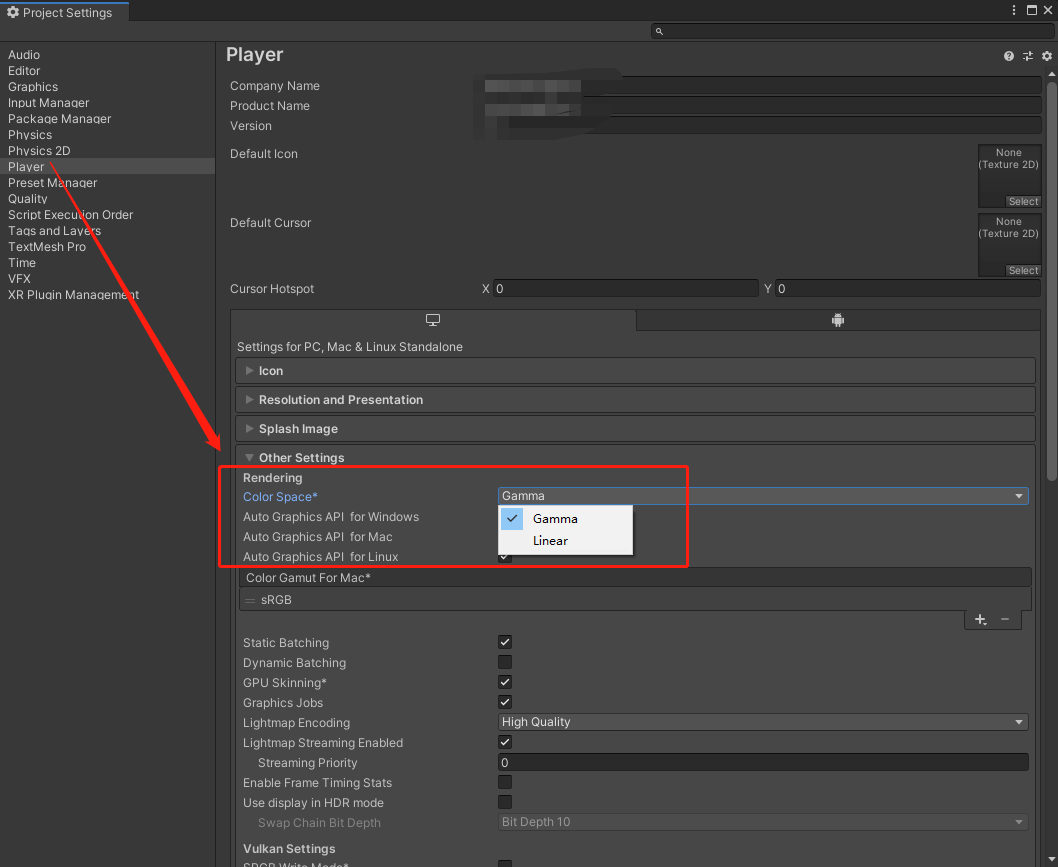 If Gamma Space is selected:

If Linear Space is selected:

So, for a texture, we need to tell Unity the type and color space of the texture: 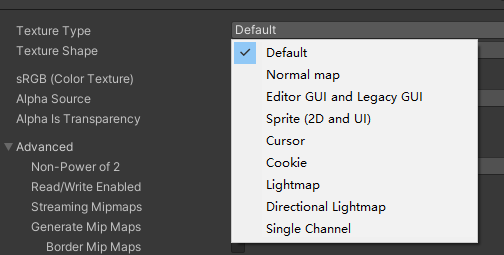 Some special texture types are Linear Space by default, such as Normal Map, Light Map, etc.

Sometimes you may need to make a Float variable also remove Gamma Correction, then you need to use the [Gamma] prefix in ShaderLab.

Mobile support: On Android, Linear is only supported on OpenGL ES 3.0 and Android 4.3 and above, and only Metal is supported on iOS. With the development of hardware equipment, more and more projects choose to work under Linear Space to pursue more realistic effects 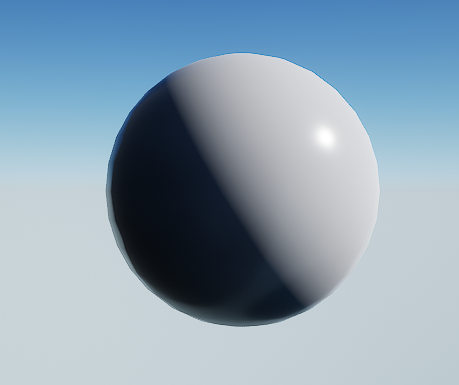 For Unreal, the principle is the same.

There are sRGB options on the Details page of the relevant Texture: 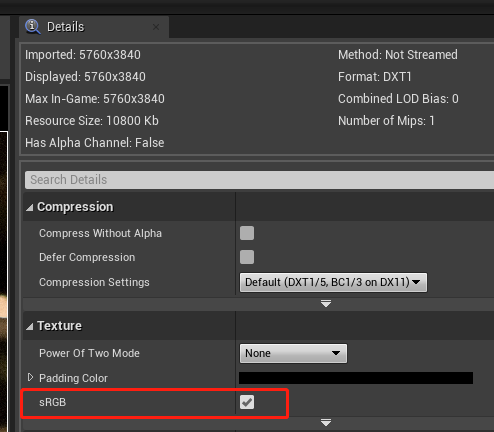 Similar to Unity represents the storage color space of the image.

Correspondingly, when performing image sampling, you need to select the corresponding sampling type: 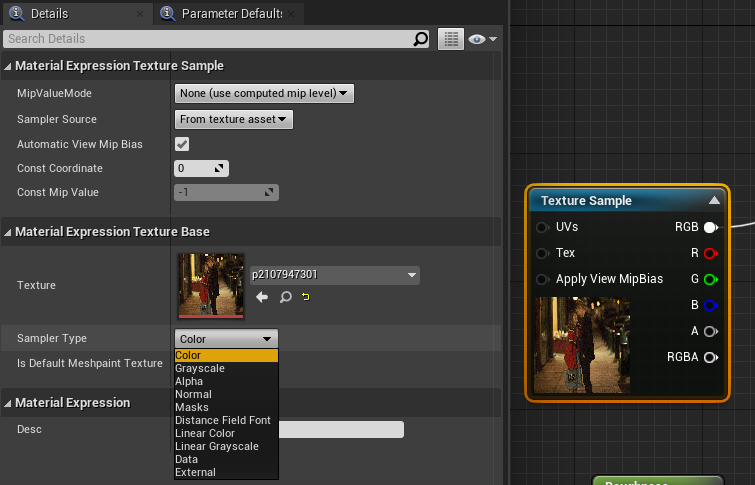 In different color spaces, the effect is different (a parallel light is added):

It can be seen that if sRGB is not checked, that is, if this image is treated as an image in a linear space, the result will be brighter. Compared with Unity, Unreal’s settings are more convenient, and Unreal can also set the corresponding space for color input: 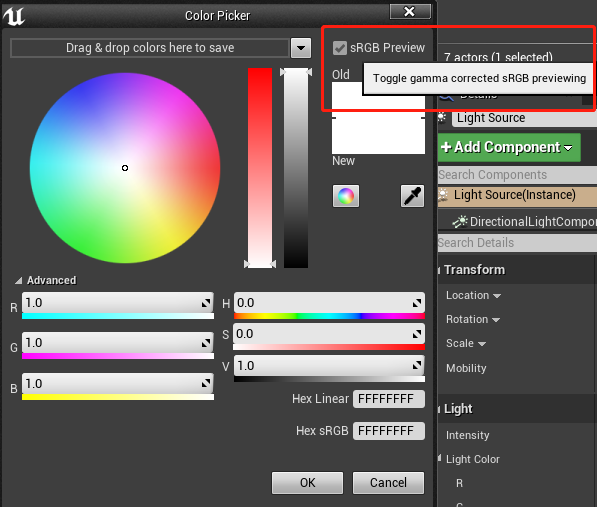 With the ever-increasing requirements for rendering, with the advent of physically-based rendering (PBR) with more realism, in order to obtain more accurate calculation results, rendering calculations in Linear Space has been gradually adopted by more teams. The two engines of Unity and Unreal also support the Linear Space workflow well. Developers should understand the Linear workflow and understand how data input, calculation, and output need to be changed. Only in this way can the accuracy of the data calculation be guaranteed.

Screen Post-processing Effects: Radial Blur and Its Implementation in Unity

Screen Post-processing Effects: Silhouette Rendering and Its Implementation in Unity

Screen Post-processing Effects: Depth of Field (DOF) and Its Implementation

Screen Post-processing Effects: Streak effect in the Lens Flare effect and Its Implementation

Screen Post-processing Effects: Real-time Glow and Bloom and Its Implementation