In the previous two sections, we combed through two workflows to ensure that the color data fed into the shader is as expected. The shader will process the input color data. In the next chapters, we will talk about some color expressions and common processing methods. 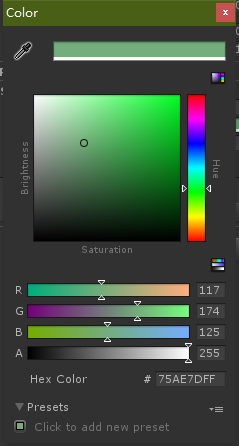 Any color is associated with these three components, making it unintuitive to continuously transform colors. Because these three variables are all related to brightness, when the brightness is changed, all three components will change accordingly. Moreover, the human eye has different degrees of sensitivity to the components of the three colors. The human eye is the least sensitive to red and the most sensitive to blue. This makes it difficult for us to more accurately infer the specific value of color under the RGB model. Based on this defect, when artists develop, they will not use the RGB color model but will use the more intuitive HSV color model.

Before explaining the HSV color model, we first need to understand a concept: spectral color.

Compared to RGB, HSV is a more intuitive color model. The meaning of each part is:

H: Hue, Hue (Hue), measured in angle, the value range is 0°~360°, and it is calculated counterclockwise from red. It can be understood that the corresponding spectral color is selected according to the wavelength. 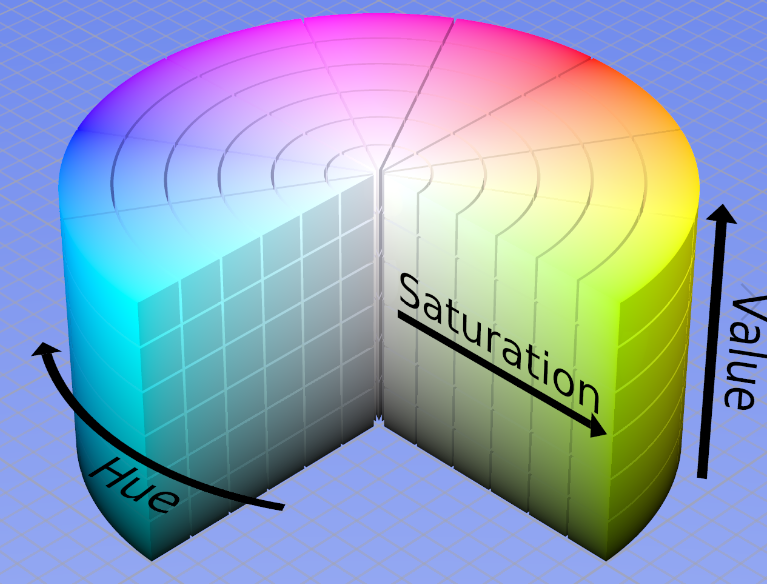 The half-side cross-section when parameter H=0 is as follows: 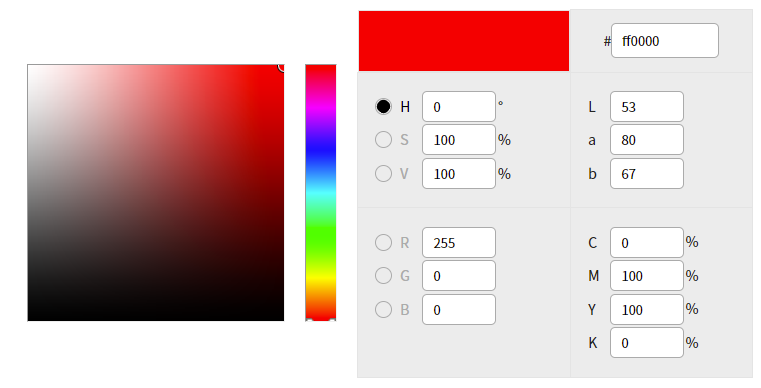 It can be clearly seen from the figure that:

Through the HSV color model, we can easily get a single color and adjust the brightness and saturation of the specified spectral color.

There are specific conversion formulas between the RGB color model and the HSV color model.

There is a corresponding API in Unity for conversion:

There are corresponding blueprint nodes in Unreal: 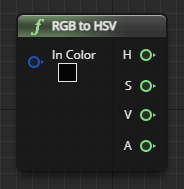 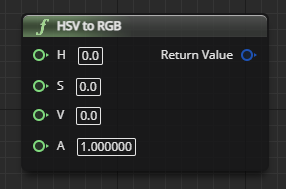 However, there is no related function in Shader that can directly complete such conversion, and it is necessary to understand the conversion relationship between the two color models. 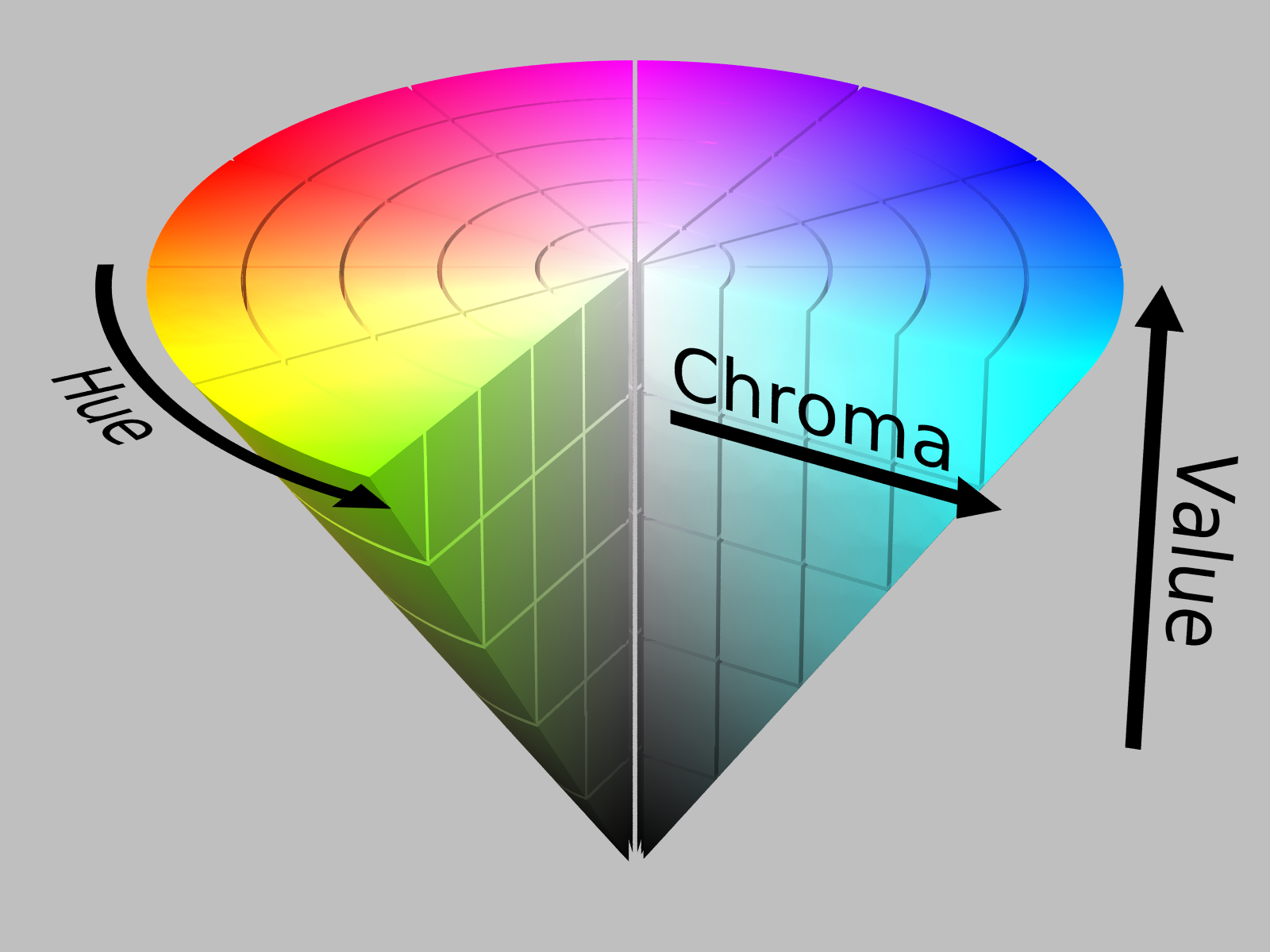 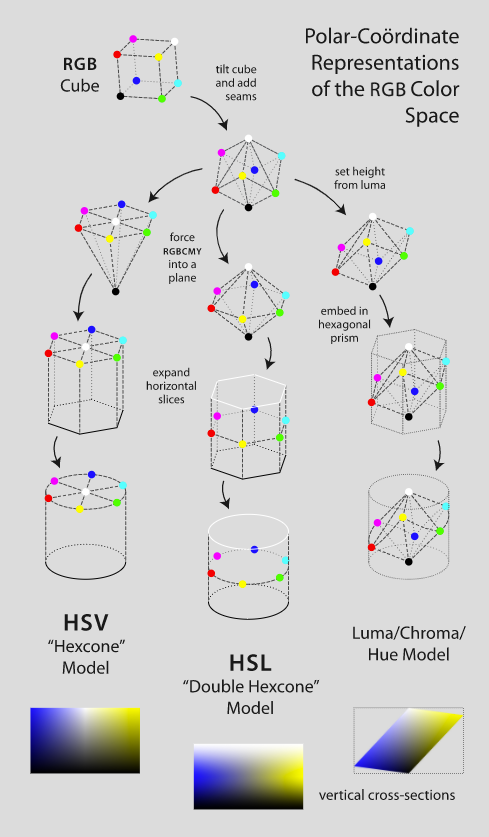 As shown in the figure above, first take the extension line of the vector from the origin (0,0,0) to the white point (1,1,1) in the RGB color model as the Z axis in the cylindrical coordinate system, and take the origin (black) as The origin of the cylindrical coordinate system. Next, create different mappings according to different rules. The HSV model is to project the seven colors of Red, Green, Blue, Cyan (cyan), Magenta (magenta), Yellow (yellow), and White (white) into the plane composed of RGB, thereby obtaining a regular hexagonal pyramid. Geometric model, and then expand this regular hexagonal pyramid into a regular hexagonal prism, and then expand it into a cylinder, and the obtained model is the HSV geometric model. As a result, a one-to-one mapping relationship is formed between the RGB color model and the colors in the HSV color model.

Building shader code in Unity based on the above mathematical model. First normalize the data in the formula to the range of 0 to 1, which is equivalent to dividing all by 360°. Rearrange the formula and get the data needed for each function: 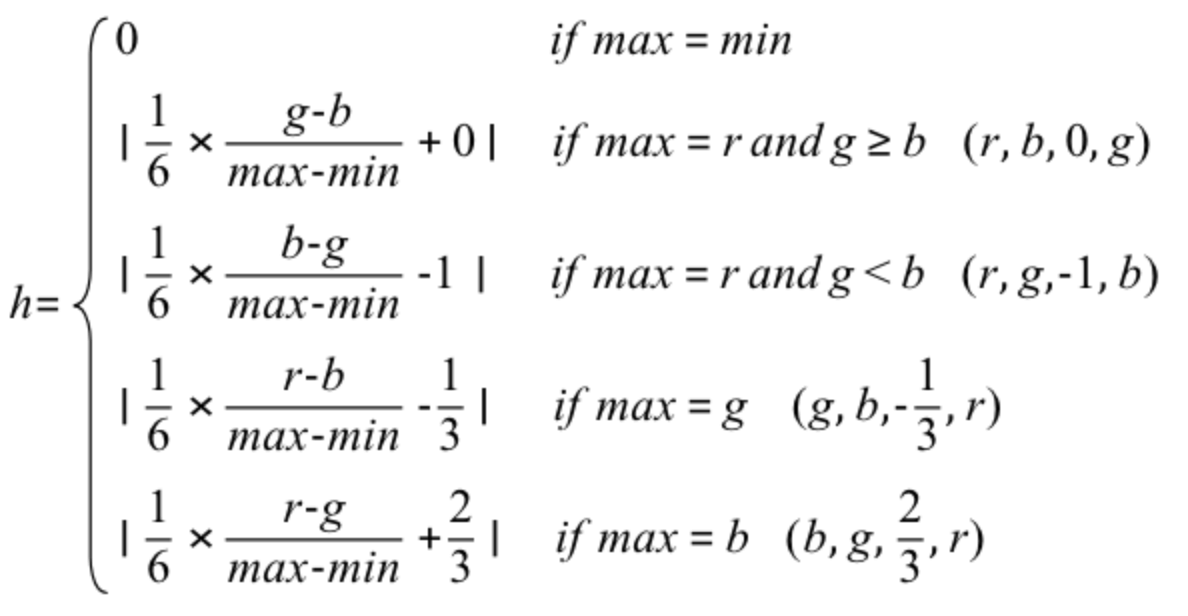 The required data is filtered through the combination of the lerp function and the step function. The step function is used to compare the size of the three components of r, g, and b, and the corresponding vector is selected by the lerp function according to the size result. Use 1.0e-10 to participate in the operation to prevent the divisor from being 0. The calculation of the remaining s and v is relatively simple.

Get the Shader code: 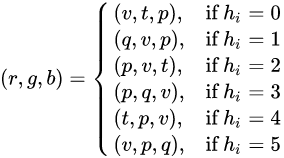 Likewise, the value of the variable H is normalized between (0,1). 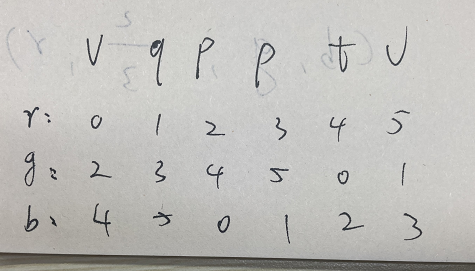 It can be seen from the observation that each calculation method can be expressed in the form of the lerp function:

After understanding the color model and how to convert each other, we do some color grading on the final picture in post-processing. Color Grading is a relatively broad topic, the main purpose is to improve the performance of the picture, including adjusting the hue, saturation, brightness, contrast, white balance and many other operations. Next, we list some common Color Grading operations. 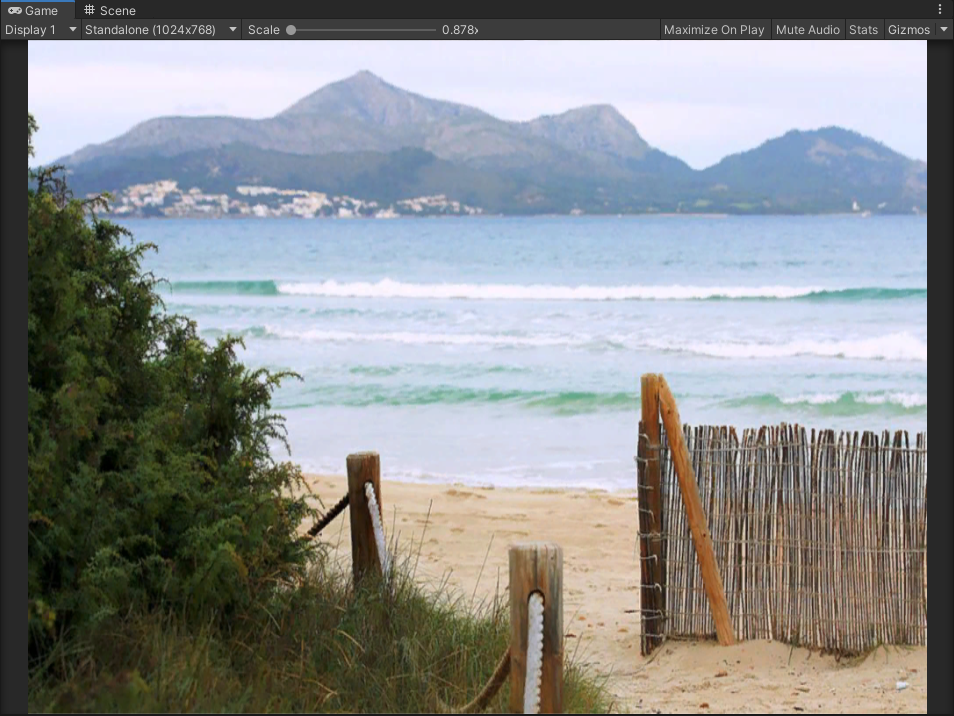 Multiply each pixel’s respective saturation (S value in HSV) by 1.8: 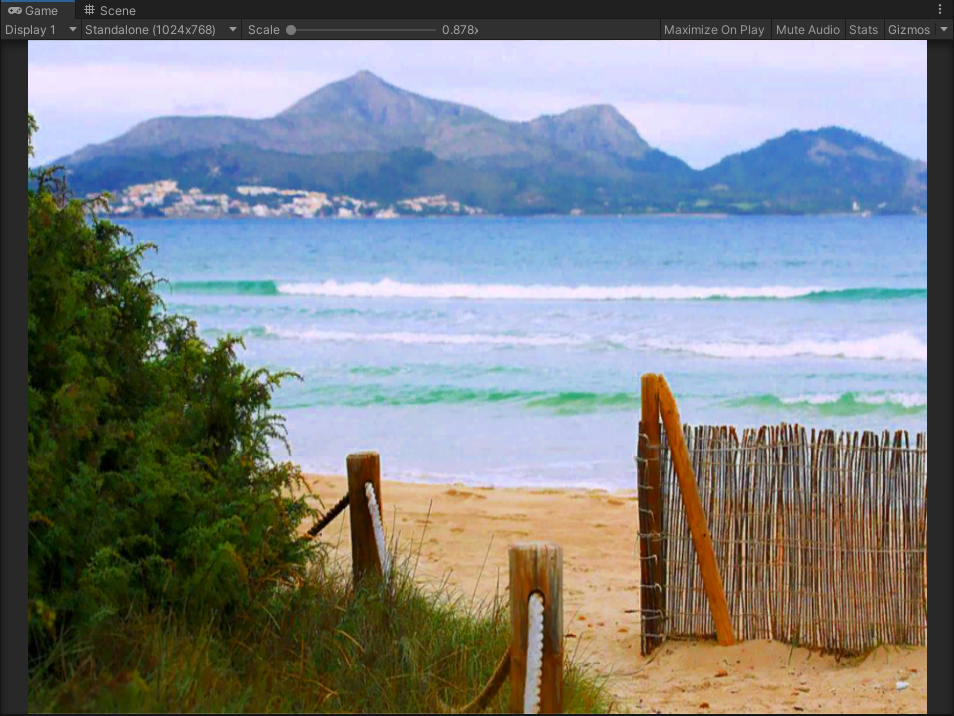 One of the more special ones is to adjust the saturation to 0 to get the effect of the black and white filter: 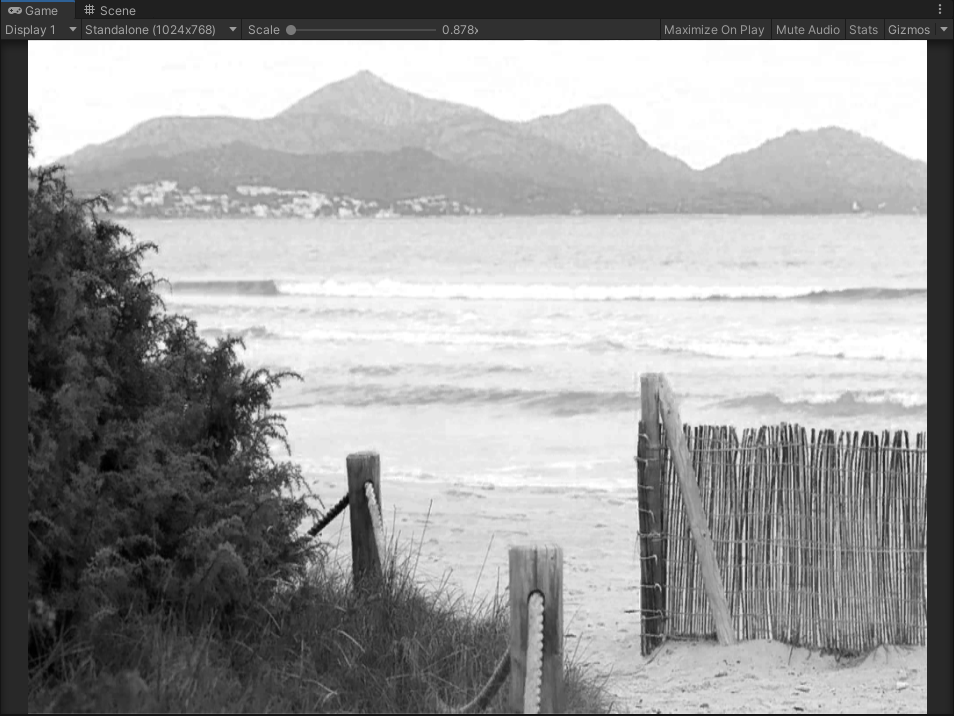 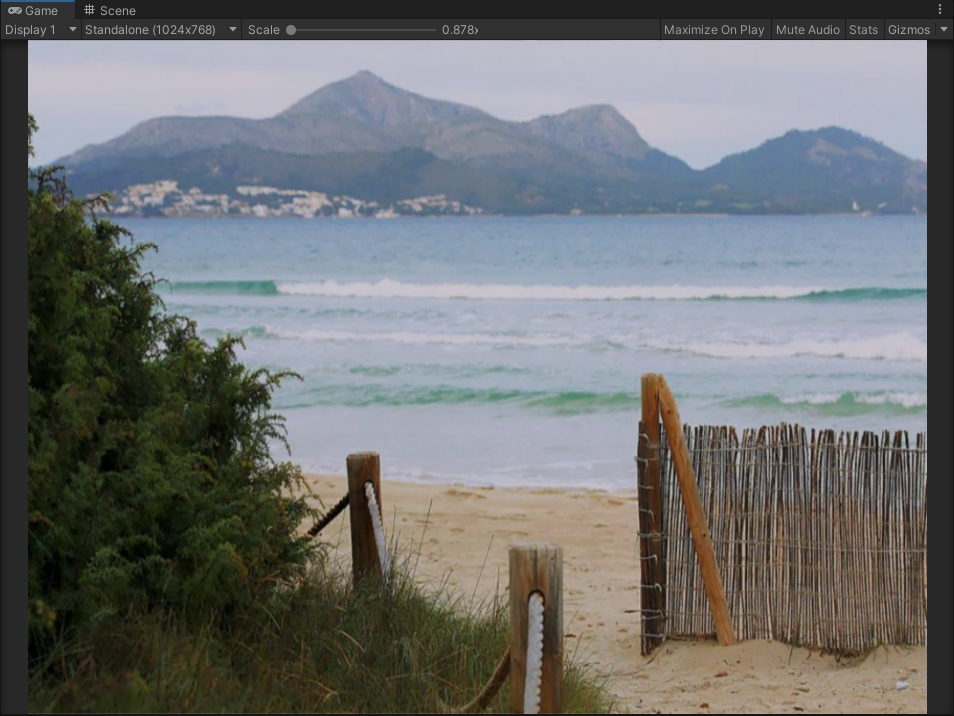 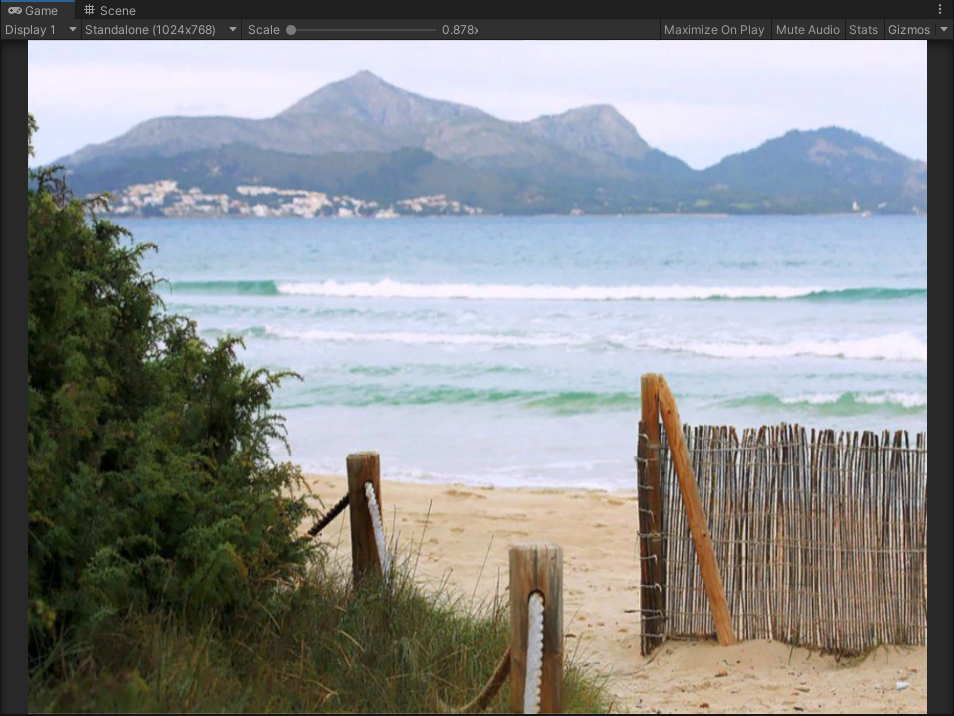 Turn up the brightness: 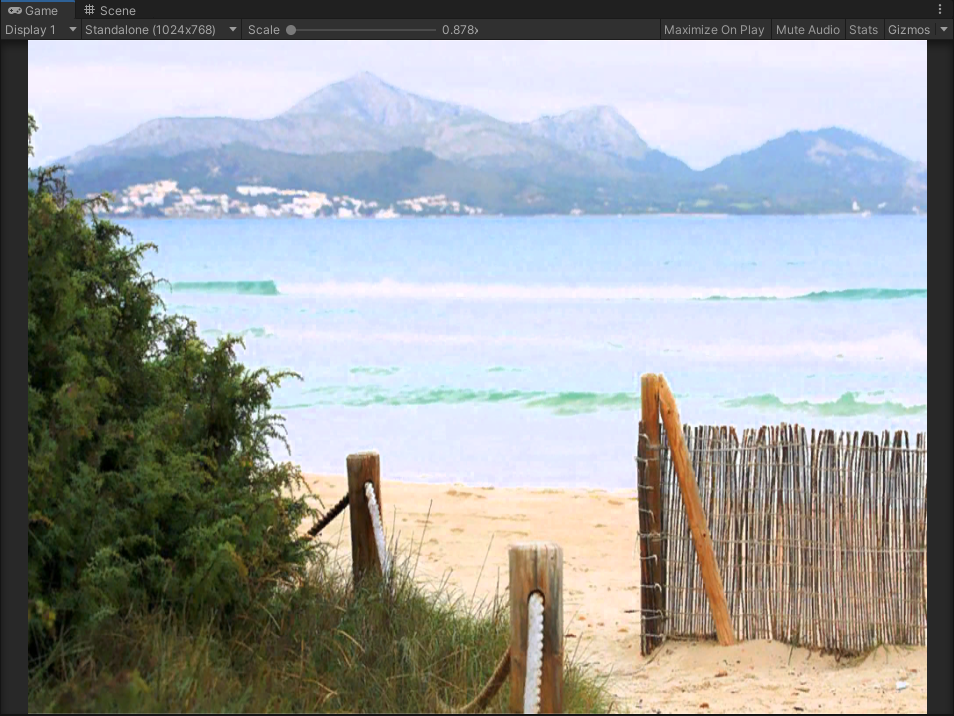 Contrast refers to the measurement of different brightness levels between the brightest white and the darkest black in the light and dark areas of an image. The larger the difference range, the greater the contrast, the smaller the difference range, the smaller the contrast. A good contrast ratio is 120. :1 can easily display vivid and rich colors, and when the contrast ratio is as high as 300:1, it can support all levels of color.

For the HSV color model, the contrast can be adjusted by increasing the difference in brightness (V value): 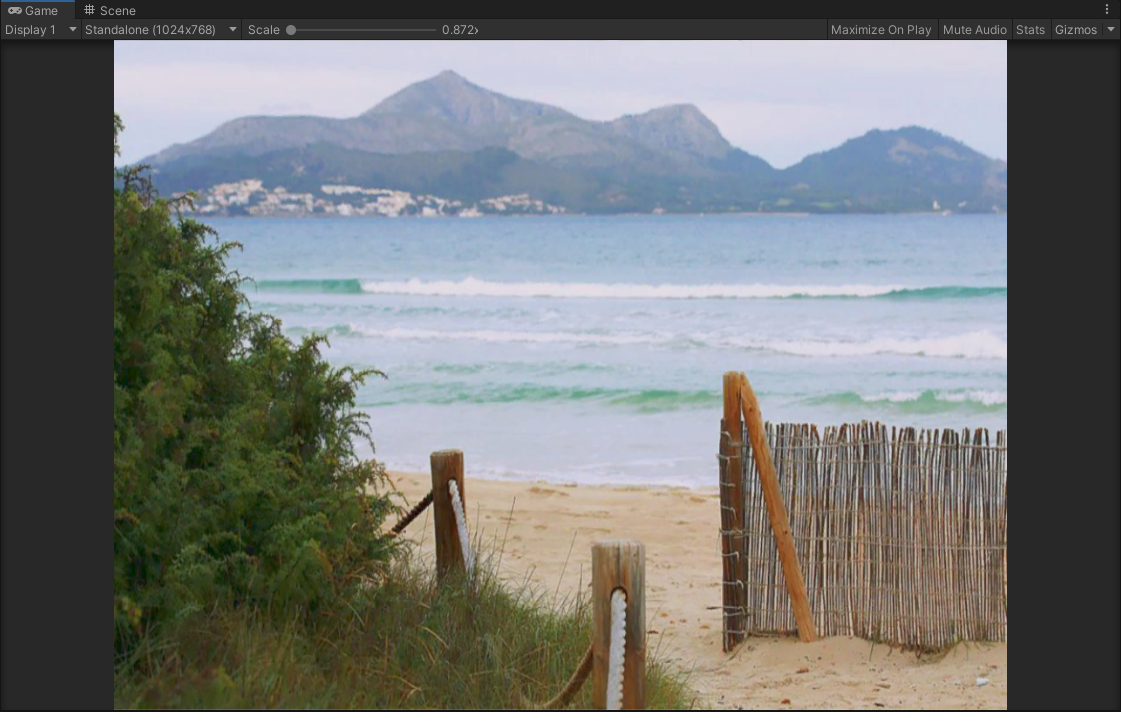 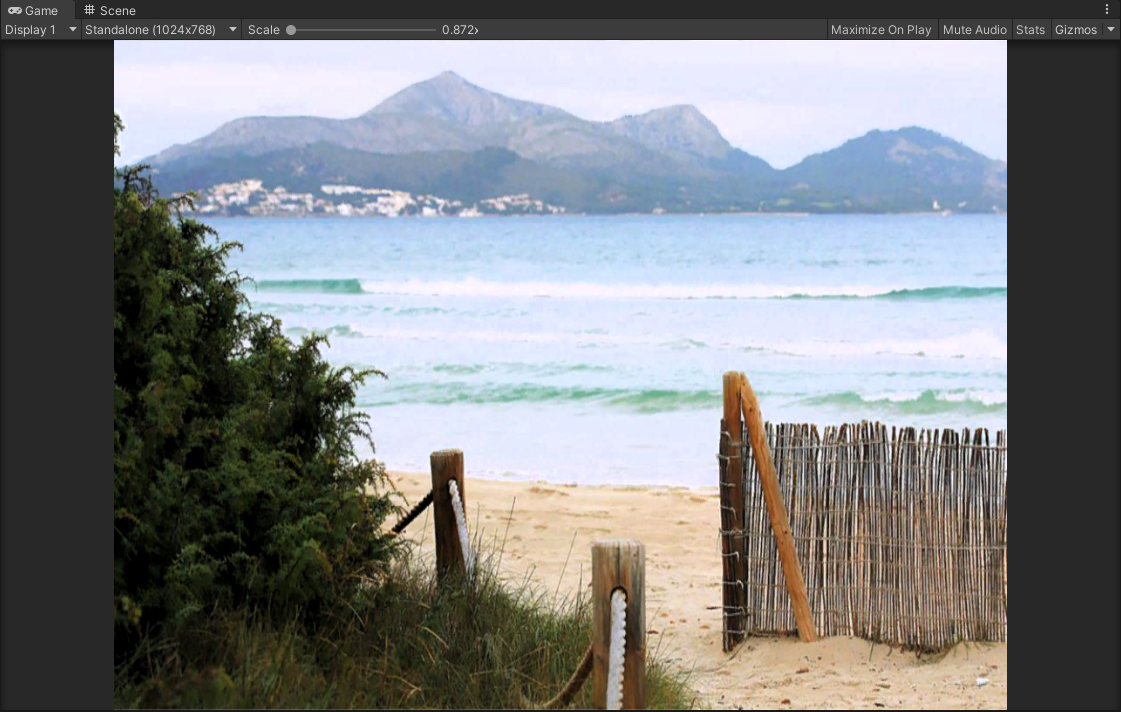 The effect of Inverse: 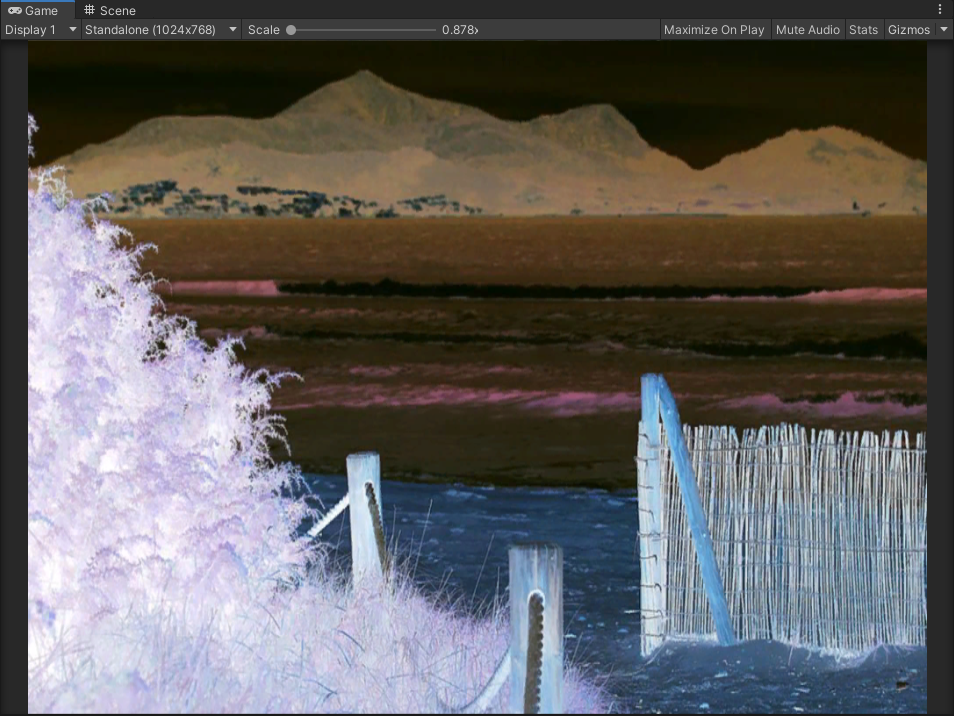 Screen Post-processing Effects: Radial Blur and Its Implementation in Unity

Screen Post-processing Effects: Silhouette Rendering and Its Implementation in Unity

Screen Post-processing Effects: Depth of Field (DOF) and Its Implementation

Screen Post-processing Effects: Streak effect in the Lens Flare effect and Its Implementation

Screen Post-processing Effects: Real-time Glow and Bloom and Its Implementation